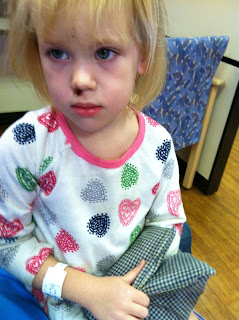 I had a crazy, busy week before my little girl broke her arm.  I had worked for 6 nights straight, 4 of those nights with no break.  Multiple admissions, codes and a cooling baby.  I had just woken up on Monday, took a shower and met my family as they came home from the school.  We were just sitting around playing with soft frisbees.  Hannah knelt down to pick up one that had fallen on the ground.  Bekah was watching her daddy and backing up so she could get ready to catch the next frisbee.  She ended up tripping on Hannah and fell on her back, putting weight on Hannah's arm.  My littlest immediately started screaming.  I knew it was a "I'm actually hurt" cry and ran to her.  As soon as I saw her arm I could see that is looked a bit crooked and that she would have to get it fixed. 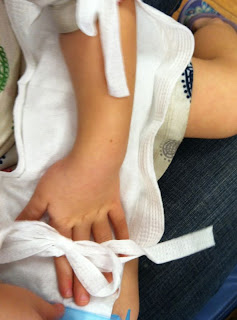 We called the pediatrician and they told us to go to the doctors office.  So we did.  And wasted an hour getting the info that yes they thought it was broken and we had to go to the ER.  We kind of already knew that.  So we drove to the Hospital and spent the next 3 1/2 hours there. 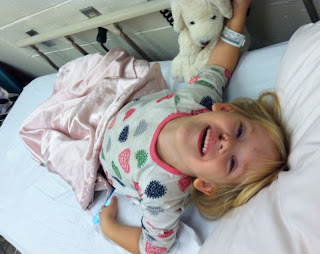 Hannah was a trooper.  No crying.  Very little whinning.  We sang and played games and tryed to get her to ignore her growling tummy as the hours ticked by.  Hannah loved the fish tank in the waiting room.  She named every fish in there: Blue, Orange and White, Yellow and White, Strawberry, Red.  Hannah ran back and fourth in front of the tank while I followed her while holding the ice pack under her arm.  Can't keep this little one down. She did great through the xrays and was amazing as they put the sugar tong splint on her wrist.  We sang Baby Mine to her and she just layed there with sleepy eyes as they wrapped up her arm.  I had promised her ice cream for being so brave.  She told everyone about it.

That night after we got home, Hannah ate her ice cream happily.  Then she started peeling the tape off her splint and told me she was ready to take it off.  She was not happy having to keep it on. 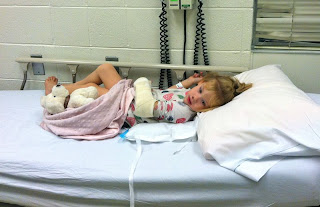 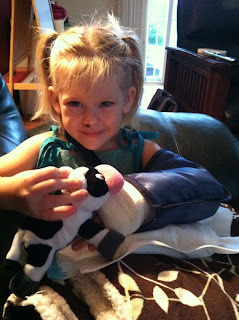 My cutie all ready for the day.

The next morning Hannah woke up screaming.  Her splint had fallen off in the night.  The ER said to call the orthopedic surgeon.  The answering service said that it was his day off and he wouldn't take calls from anyone he hadn't seen yet.  So off to the ER we went and Hannah got a plaster cast that couldn't come off. 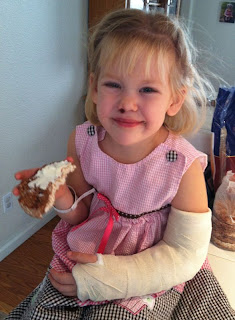 Hannah was in good spirts while waiting for the doctor.  She played catch with daddy and drew pictures.  She is getting very good at figuring out how to do things with one hand. 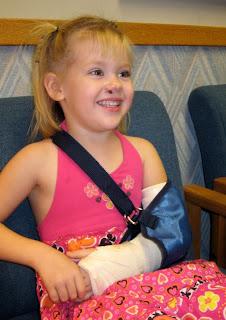 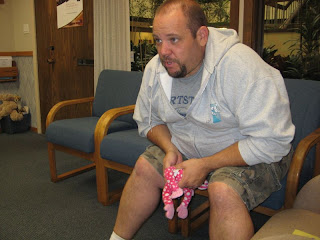 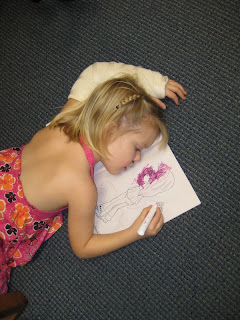 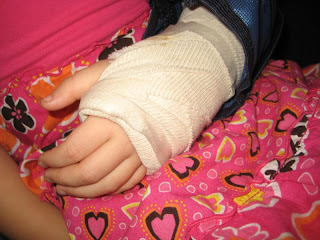 The orthopedic doctor had a cool xray machine in his office.  He had to cut the plaster cast off so that he could take the xrays.  Then we found out that two of her bones were bent, not just one.  He put her in a fiberglass cast that glows in the dark.  She was so brave through the whole thing.  She did whimper a bit when he was putting her arm in a good position to heal correctly. 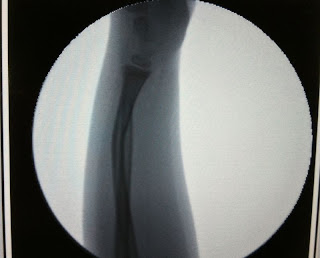 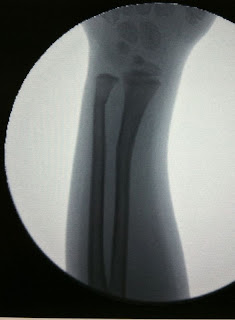 Then they had to cut off the extra bit around her thumb.  We got to wear cool eye protection and helicopter pilot ear protection. 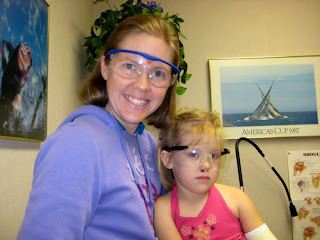 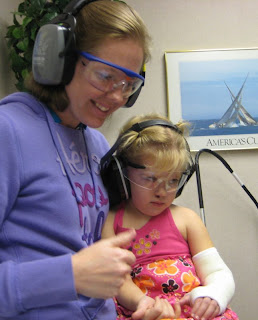 I love the look on Hannah's face here.  She was so trying to be brave, but I could feel her shaking a bit in my arms.  We gave her a See's Candy chocolate after everything was done.  She deserved it! 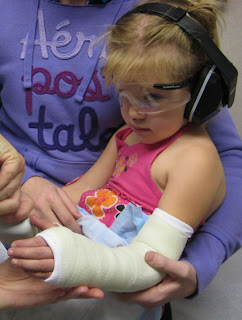 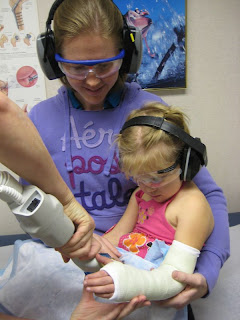 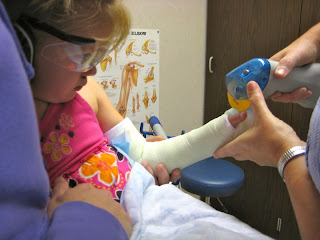 After we got her cast on, Hannah got to pick a special toy.  She picked a pink piggy, named pig.  We drove over to my parents house to see my Aunt Barbara and my Grandma Carol.  She accidently left her piggy there.  I called when Hannah realized that it was missing.  She talked to her Nana who assured her that the piggy was still there and would wait for her until tomorrow. 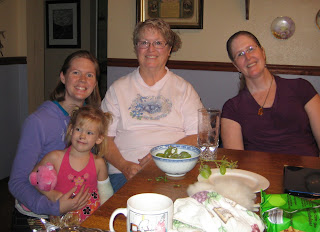 Later that night, she had me call again-just to make sure that the little pig was still there.

So Hannah is doing great now.  She will have the cast on for three more weeks and then everything should be good.  My little peanut is feeling much better and is already running around and playing.  Thank-you for all your prayers!

Posted by Sarah Kuhner at 9:24 PM No comments: